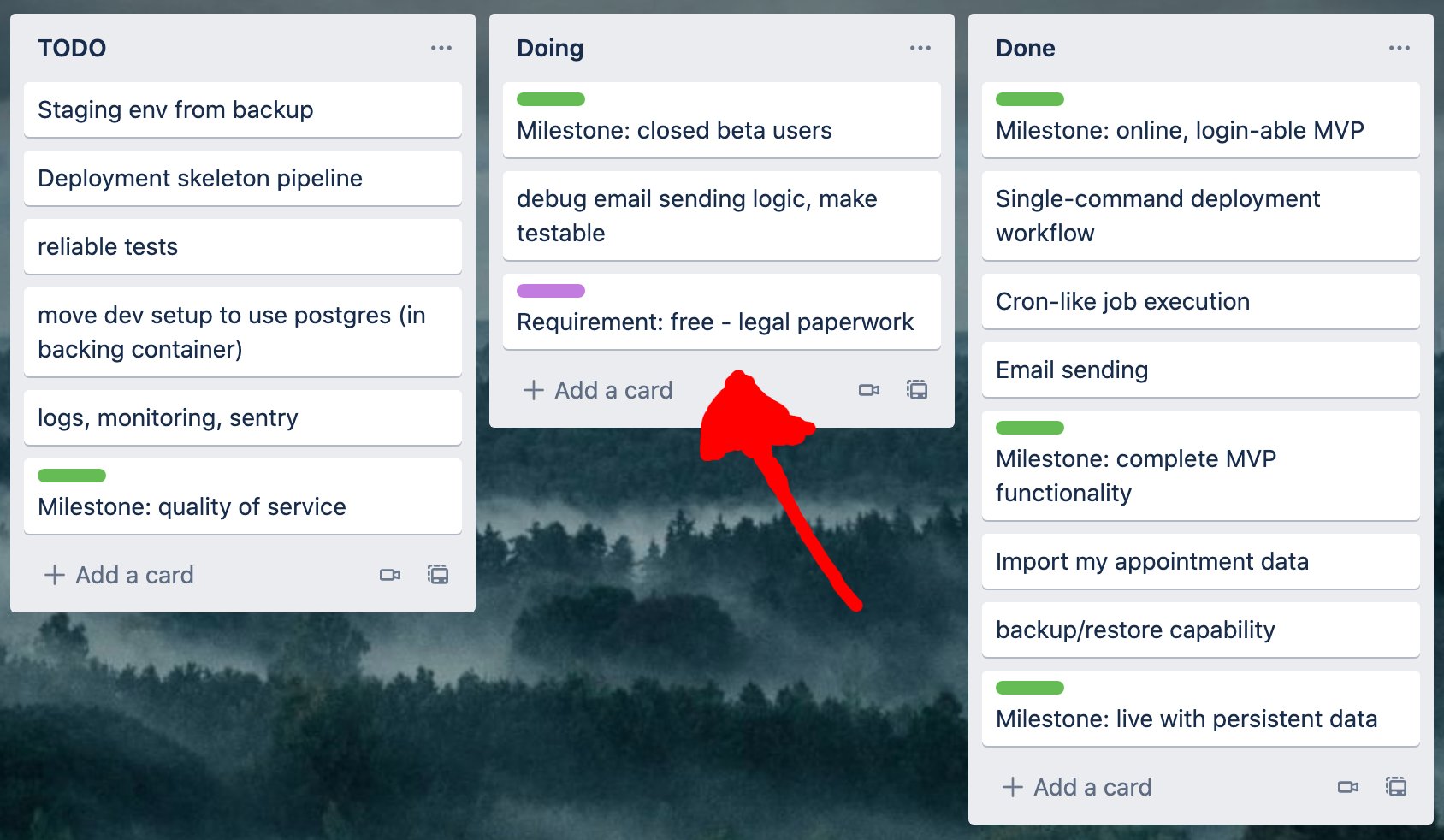 Right now, I'm building the prototype of a first SaaS. Above, you can see a snapshot of my Trello board for the project. Tasks are supposed to be processed from top to bottom in the Doing or TODO column, and are appended to the bottom of the Done column. Green cards are milestones, purple entries are supposed to run in parallel.

By the way, you can get regular updates on how that's going on Twitter.

The one the red arrow is pointing at is a really big one - what needs to be in place so I can bring this project live, even if it's in an unpaid form?

Sure there's legal paperwork for the page itself - a privacy policy, an imprint (in accordance with German laws), terms of service, all that fun stuff. But there are more requirements to offer an online service.

The question I had to ask was: "What legal entity can run a SaaS?"*

An important disclaimer: This is not legal advice or financial, I am not a lawyer. In fact I consider myself to be quite clueless. The following is a summary of my initial research, and can be largely wrong.

To my best understanding: there doesn't need to be much complicated overhead when getting started.

It seems like I don't have to incorporate into a "UG" or "GmbH". As long as there's no more than more than 260k in revenue, or 25k in profits, I can do it as a "GbR". Just a "Gewerbeanmeldung" and a business adress are needed.

UPDATE: Actually, a "GbR" is for multiple people doing business stuff together. "Einzelunternehmen" is the proper thing to register.

There is no limitation on liability in this format, but that's a relatively unlikely risk with the products I have in mind initially.

UPDATE: After some research, I realized that I don't have a firm grasp of possible risks. That's not cool.

It seems like I'll be able to bring something online without having to wait for weeks or jump through too many hoops.

UPDATE: I don't think the above statement is correct anymore.

But what would be the road forward?

Now, if you go the usual way with a German company, you'd want to make your initial "GbR" into an "UG" or "GmbH" eventually. That's where you get limited liability and a real legal entity.

Of course, you have to pay extra attention doing so. You have to be very explicit about the GbR being transferred completely into the new company, otherwise there can be significant tax costs coming your way.

Otherwise, you need around 12.500 Euros of capital to found a GmbH.

But is this all there is to it?

Now, if you want to run a GmbH in Germany, you should consider founding two at the same time. One to be your "holding", the other to actually do business.

There's a book about this. It's very good. This is the format I would go with, if I were to found a German legal entity.

Let's take a step back.

Before focusing on solutions, what would I like to be able to do beyond the initial goal of "getting something started and out there"?

What I'd like to have is a legal entity which can operate a portfolio of (SaaS) digital assets. A few items from my imaginary wishlist for that entity:

I have a list of desirable aspects for an environment for this legal entity to operate:

Regarding investment stuff and buying/selling projects, a US entity would probably be best, but alas I don't see myself wanting to operate one without actually living there.

What other choices are there?

Locations For An Internet Company

The Best Country to Incorporate an Online Business by Jase Rodley is the best overview I have found on this topic. There are quite a few possible locations to incorporate!

I have my eyes on an e-resedency in Estonia right now - mostly because it sounds like a very well-executed offering, and I know at least one person running their portfolio of digital assets over an Estonian company.

It's not about saving taxes. On the contrary there would be slightly more, but it seems to be friendlier to unconventional living conditions. I like the idea of that flexibility.

There's a slight downside: the slim chance of the company getting sued in Estonia for some reason, which does not sound like fun. At all. Running into legal troubles in Germany is surely no fun either, but at least it would be in a better-known environment. However, the lower-seeming paperwork overhead, and ease of getting started seem very tempting. At least for the "portfolio of small projects" part. I don't expect that the projects I start will make absurd amounts of money anytime soon. Instead, I'm aiming for a solid personal income to work on the things that will.

There's a lot to find out still. How would the transfer of initial work into a properly incorporated entity work out? (Thinking about the "Einbringungsvertrag" in Germany is pretty darn important tax-wise).

Eventual eventualities. General tax concerns. Gotchas I might now be aware of. But it's nice to have an overview at least. And a clear way to get started for now :) 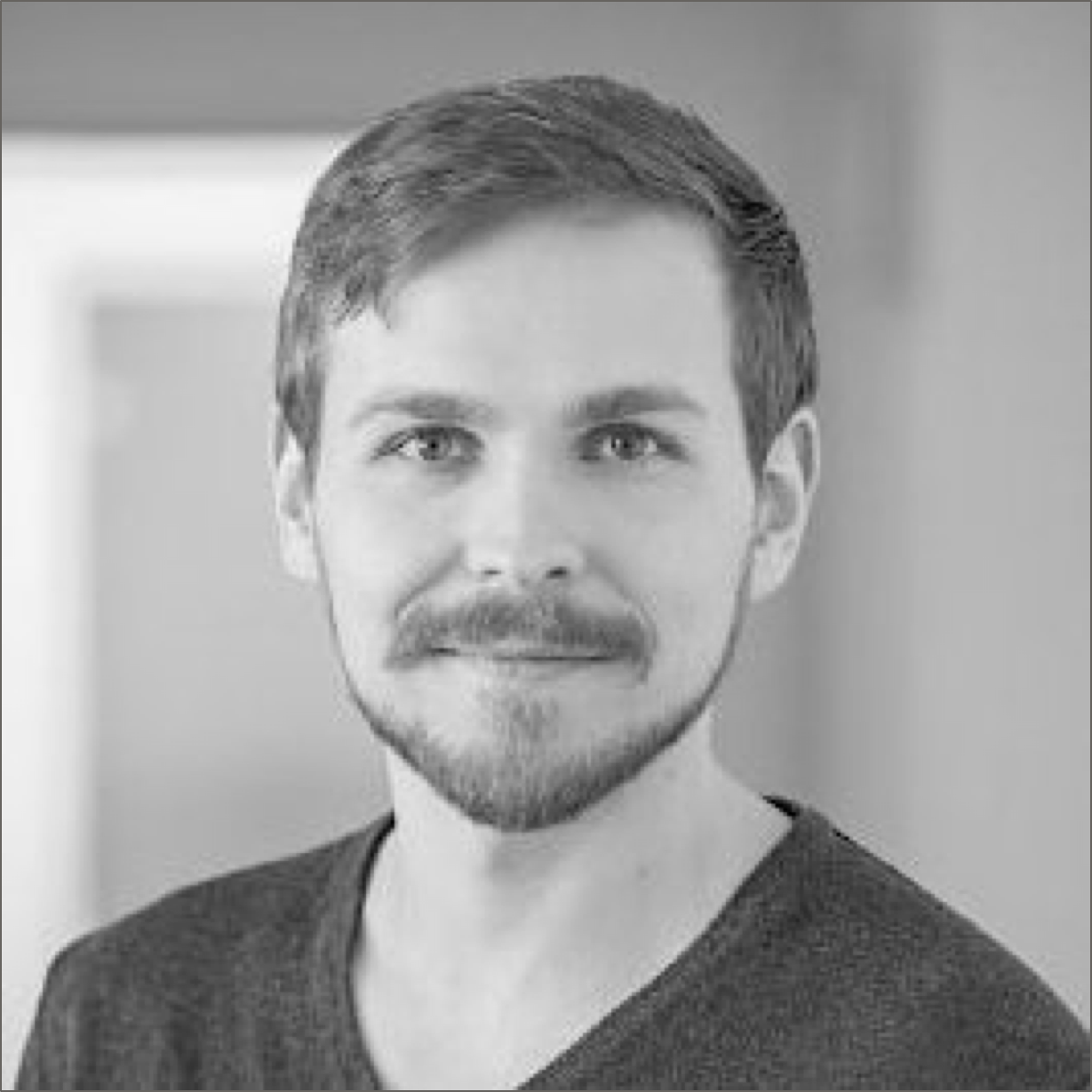 Hi! I'm Vladislav, follow me on the journey towards building a portfolio of assets and reach 2000 MRR.